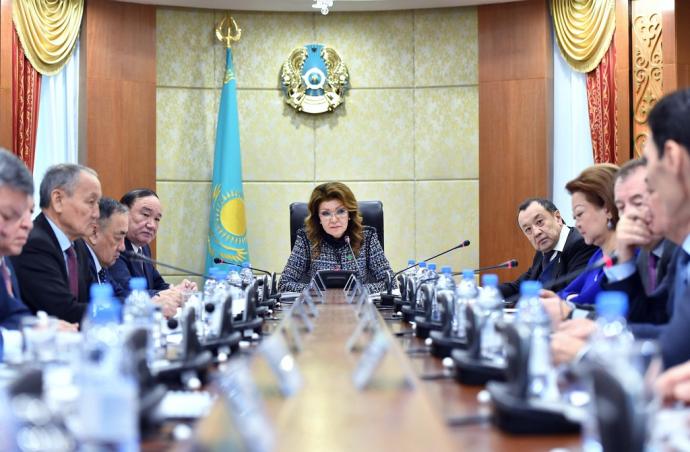 A series of meetings with representatives of the agricultural industry is held as part of preparation for the parliamentary hearings in the Senate. The Senate Speaker Dariga Nazarbayeva met today with the management of Kazakh Invest National Company JSC and KazVodkhoz RSE.

The Chairman of the Board of Kazakh Invest National Company JSC Baurzhan Sartbayev told about the main problems in attracting and supporting investment projects in the agribusiness sector. The head of Kazakh Invest named the lack of free land plots that investors would be interested in as one of the main factors that have a negative impact on the sector. Other mentioned problems included the absence of guarantees for state support measures, financing of engineering infrastructure and high requirements for collateral.

Senate members took an active part in the discussion and told about the results of recent meetings with voters in the regions. In particular, they raised the issue of investment attraction by peasant farms engaged in camel breeding.

D. Nazarbayeva gave her comments on the results of the discussion, emphasizing the need to create equal conditions for both foreign and domestic investors.

General Director of Kazvodkhoz RSE Bakytzhan Kemelbekov told about the work of the enterprise and expressed his opinion on the problems in the country's water sector.

According to the General Director, Kazvodkhoz currently owns 4,703 different waterworks facilities, and the company suffers losses because of the unified tariff introduced for all regions. “Many of the facilities that have been transferred to us are not in a good condition. Their maintenance is expensive,” he explained. The facilities were owned by local executive bodies, now they are on the balance sheet of Kazvodkhoz RSE. Bakytzhan Kemelbekov admitted that the mechanism of their operation was not worked out during the transfer to ownership.

Summing up the discussion, the Senate Chairperson noted a problem of state management of hydraulic facilities and an unbalance in the system of relations between the central authorized body and regional akimats in terms of financing, maintenance and operation of these facilities.

In order to overcome the crisis situation, D. Nazarbayeva considers it necessary to combine such measures as using modern approaches to attract investment, developing a system of differentiated tariffs that would take into account the interests of consumers and ensure the normal operation of hydraulic structures, including the operation of waterworks facilities in the Territory Development Program, involving Kazakhstani research institutes in estimation of industry standards and development of technologies for improving efficiency of water management.

“Unfortunately, our government departments cannot build joint work with scientists. Although they know a lot, they have information. They know what is on the earth, what is underground and what is in the air. The thing is that this information is not in demand. What is the result? There is no deep analytical elaboration in any issue. Someday, we must stop deceiving ourselves and begin to trust our scientists and our specialists,” D. Nazarbayeva said.

At the end of the event, the Senate Chairperson instructed the Committee on Agrarian Issues, Nature Management and Rural Development to study the problem issues raised by the meeting participants and prepare them for discussion at the parliamentary hearings.